In 2105 we have had a look at previous 10 drafts to see how rookies fared in their first pro season. From that we learnt 10 lessons, which could help us drafting future rookies more effectively. But the time moves fast and we’ve had 3 classes completing their first season as pros since then. So let’s have a look at how the rookie landscape has changed and if fantasy managers modified their approach to drafting them.

The original article covering drafts 2005-2015 – you can find here: Rookies in fantasy basketball are they really worth the risk 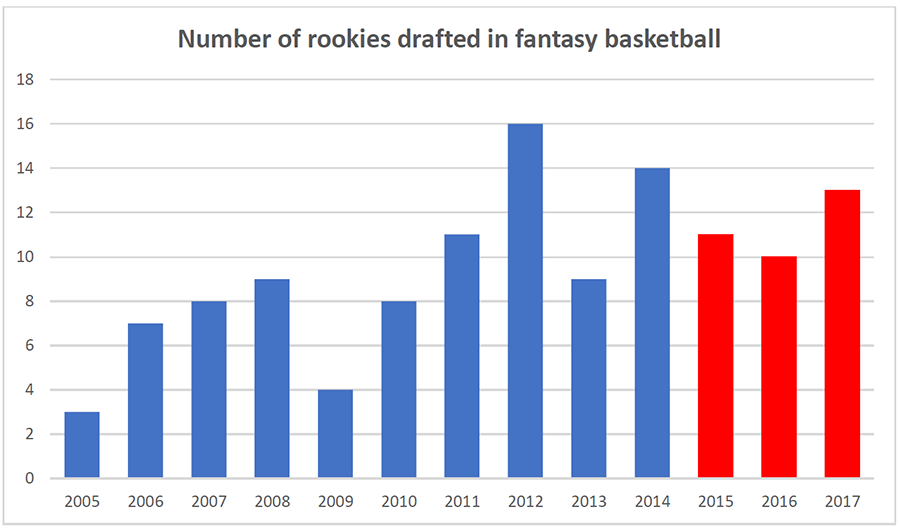 Last 3 seasons number of rookies targeted during fantasy drafts remained high. Between 10 and 12 first year players were selected each time.
In my previous article I’ve estimated chances for rookie to beat their ADP at about 15% and for the pick not to be terrible at about 21%. So the odds were not great…

The odds were not great, but if you wanted to build on rookies – that was the year to do it!
2015-16 was one of the best seasons to draft rookies since two of them ended up in Top50 ranking (9-cat), which hasn’t been the case since….Tim Duncan and Zydrunas Ilgauskas back in 1997-98.

KAT and Porzingis were simply amazing, beating all expectations and winning many leagues for their managers. But there were several other rookies worth a mention. Myles Turner and WCS turned out to be fringe rotation players. Jahlil Okafor was overdrafted, but definitely was not a bust. Unfortunately his rookie year was also his best so far. Others – well – they played more like rookies and were quite useless for fantasy purposes.

What goes up – most come down. What a beautiful disaster that was!
Not only current #1 pick (Ben Simmons) did not play a single game. Former #1 (Joel Embiid)
managed to play only 31 games.
On top of that none of the other rookies managed to beat their ADP (even those modest
ones), but to make matters worse – not even one of them came close. That was a complete
let down.

It was the worst rookies class for fantasy since we have started looking at data!

But also in order to be fair – fantasy managers did not expect a lot since none of the rookies
had an ADP in Top100, so kudos for managing your expectations.
Let’s not spend too much time here. It’s too dark.

And then there was last season. Fate of this rookie class was highly impacted by injuries. Simmons played more like someone who spent a whole year learning about NBA. Injury to Gordon Hayward forced Jason Tatum to mature in a matter of days rather than months. John Collins benefited from the Hawks rebuilding project which included actively working on their lottery position and developing youngsters rather than fighting for the win in each game. Markelle Fultz had his rookie campaign cut to only 14 games – thanks to his injured shoulder. Lonzo missed a lot of time and showed a lot of promise but was simply drafted too early. Markkanen might have been the biggest prize of the Jimmy Butler trade to Minnesota. He certainly looks like a modern version of an offensive big. A lean 7-footer with a deadly 3-pointer. Dirk Nowitzki version 2.0? But the biggest surprise was Donovan Mitchell. He took the league by the storm and became highest ranking rookie who was selected outside of Top10.

Four rookies ranking in Top75 is unprecedented and goes against anything we’ve seen over the years.
So the lesson (#11) here is to remember that and to not get carried away with the class of 2018.
Luka Doncic will be great. Trae Young and Colin Sexton possibly too. Ayton, Bagley, Bamba may be the next crop of great big man.
But do not set your expectations for them based on how many solid rookies we have seen recently.
Remember that not only pure talent makes a good rookie in fantasy. It’s also your ability to not overvalue them and draft too early.

Lesson #2: Avoid drafting rookies with gaping holes in their game. They may come around within next couple of years, but in their rookie season if they cannot shoot, or make FTs or rebound –NBA game will only magnify their problems.

Lesson #3: Position matters a lot. If your player is forced to play outside of his natural position – he may not be as productive as he could.Even if offered enough playing time.

Lesson #4: Health matters. Both physical and mental. Oden had a long track record of health issues, so we could and should have been more conservative and draft him later. As for Beasley – player can have all the talent in the world but if his ego is even bigger – that’s a recipe for a disaster.

Lesson #6: Pay attention to pre-season, as it can be an early indicator of future success.

Lesson#8: Contrary to whatever you may believe or have been told earlier in this article – if a transcendent talent comes to NBA – draft him as high as you can and do not worry about anything else.

Lesson #9: Buyers beware! If your rookie cannot make FG or FT to save his life in college – he won’t magically learn to do that on a biggest stage of all.

Lesson #10: Even if talent is there. Even if role seems big enough. Even if rookie is level-headed. Even if minutes and opportunities are there. You need luck with injuries. Lots of luck.

Lesson #11: Do not get carried away even if several rookies in recent past were better than expected.