How many times did you draft with confidence, taking the best available players and wondering how the hell they could fall until your picks happened? And coming out of the draft really proud of yourself only to find out that your fresh team is, indeed, full of great names but not really that strong as a pack? As if it wasn’t hard enough to estimate every player’s statistical production and its value within your league’s settings, you also need to make sure your whole team brings you firepower in all the categories you plan to compete in.

Some managers prefer collecting best players available so that they can take care of team stat balance later on. Masters of trades … I used to be one, negotiating deals almost every day of the season. But the truth is – the more experienced your competitors became, the harder it is to negotiate deals. And the more pressure you feel to make a deal, the more eventually you’re forced to sacrifice to get your deal done. Not to mention that it requires lots of analysis (tools like Trade Analyzer could be helpful here) so why not get armed with deep analysis right from the start?

was first released last year for the rotisserie format and not only helped many managers build optimized roto teams but also opened our eyes for some under-the-radar players (Al Horford or Otto Porter being good examples) that are treasure for most rosters. And now head to head players could use the same help during their drafts… Or even mock drafts… or draft simulations, which I’ll talk about in details later.

So, it might sound great in theory and all but… But what really matters is to see and try it in practice. It’s a part of fb-ninja premium content but no worries if you don’t want to spend your money just to test the draft tool. Just sign up for the trial period and you have a 14-day full access to all our tools. Then just find the Premium tools -> Draft tool menu option and choose your draft setup.

As I don’t want to duplicate the content, I’ll not describe every detail of the draft setup. You can easily find it in the Draft Tool roto version article (http://blog.fb-ninja.com/draft-tool/). What definitely needs further explanation though is the custom league settings form for the h2h format.

Custom leagues are more a kind of sandbox places for you to experiment with your drafting strategies and get familiar the application features. All of that without any typical rush, within the pace you dictate, with offline picks for each team and more than enough time for in depth analysis.

playing with a new custom H2H league however, you need to provide some more details on how you’d exactly like your league to look like. Additional H2H information include: 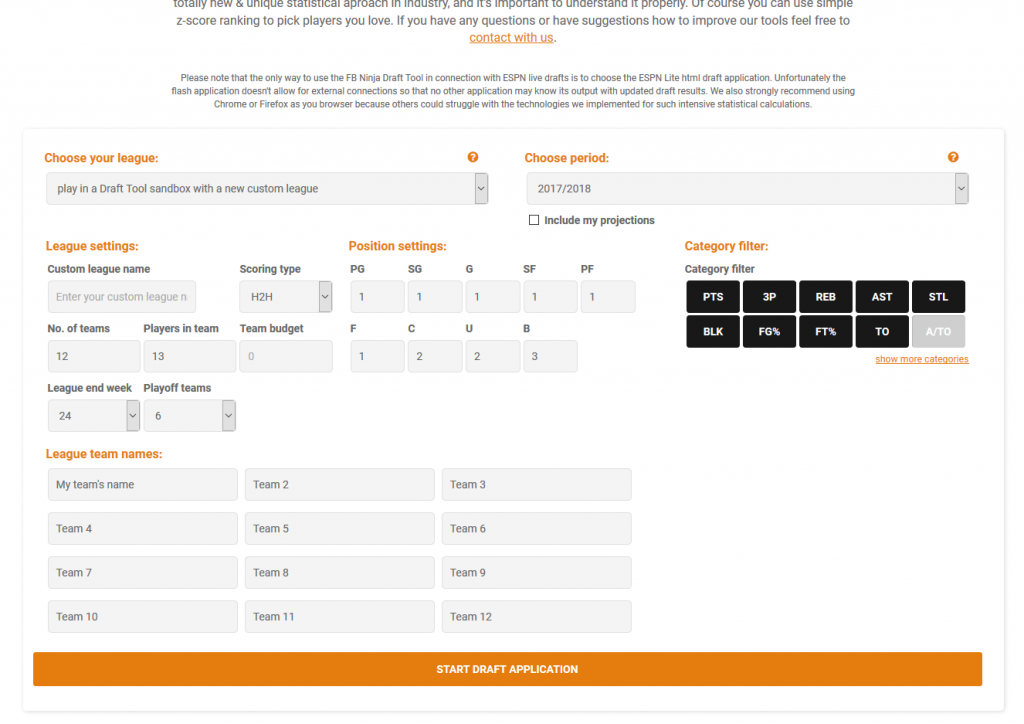 There are default values provided right from the start, just make sure they fit your needs. Also, provide a name for your new custom league and check the default values for other parameters.

Once you already get more familiar with what you can get from the Draft Tool, you can test your strategies with others using Yahoo! Mock drafts. The only data for the Draft tool to get connected to a mock is the mock draft url address provided with a copy and paste action.

The easiest start is for those who go for a real draft within one of existing Yahoo! Leagues… which is understood after all, as you have enough stress elsewhere then. Just make sure your league is imported to the fb-ninja website in advance, choose it from the list, select the statistics sample period and start!

So, what is exactly the

coming from the Draft Tool being attached to your draft?

Well, there are plenty of them and it’s only up to you to decide which of them you’re going to use and how.

One of the most popular ways of estimating player’s value is using the z-score ratio which compares his production in all the counted categories to the league’s averages. You can easily find it in the “Value” column, colored accordingly. Of course, it’s h2h, so you may quickly choose your strategy with punt categories. No worry then as the values can adjust quickly. Just click the “settings” and choose the punt cats. After applying your changes and refreshing the page you’ll see two more columns – one for the value related to the non-punt categories and another one for the difference between the standard setting value and the punt value. Feel free to sort the table using any of them.

Of course, you don’t have to rely on values calculated from last season’s stats or fb-ninja projections. You can easily import your own projections using our new importing tool and attach them to the application.

Drafting based on the z-score value provides you with potentially the most productive players possible but it doesn’t necessarily mean success in h2h leagues. Collecting good h2h teams is not only about the value of production but also about how actually that production is balanced between categories and how it impacts your matchups. And here’s where the real advantage of the H2H draft tool arrives.

In search for the overall matchup advantage, three sources of information come with help. The first and visible right from the start is the

column. It looks not that impressive but what’s hidden behind – definitely is. For each top 20 (by default) from remaining player list there’s a season simulation calculated with all the taken players and the one from that row added to your team. That gives you a possibility how the season simulation would change if you select the player with your next pick. And the number means your weekly matchup category wins total plus ties divided by two.

Why just top 20? Because that’s a really serious piece of calculations your browser needs to handle and if we decide to take more – drafting on slower browsers could distract the experience. But don’t worry. If you need your preferred players to be included, just turn the “target player” settings option on and add them to the lucky list. 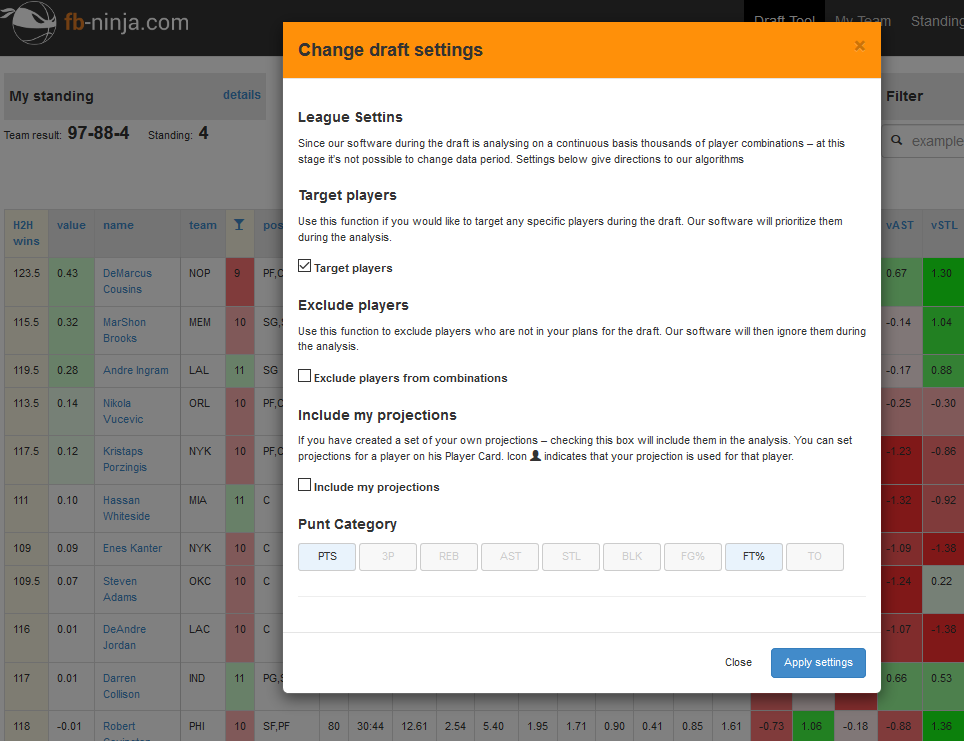 Is it “H2H Wins” a silver bullet following you straight to a perfect team? Almost always 🙂 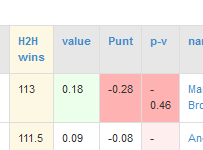 You need to take into account that the base for such calculation is just the list of taken players so the results provide the best picture rather in the second part of the draft with all the teams already filled with similar amount of players.

I tend to start my drafts with building my strategy on strong value players, according to my projections and preferred categories. I just realize then that “H2H Wins” suggests more “roto friendly” players, able to win me almost all categories which doesn’t actually happen at the end of the day. But the more drafts go on, the more I care about refining my team and the more all the simulations matter to me. And also the more carefully I check other tabs like “Standings”, containing a very detailed season simulation based on current draft results.

Even more often I check the “My Team” with all my team’s strengths and weaknesses being on a full display from various “camera angles”. The angles are the following:

As I said before, all three don’t have to look similar depending on the moment you look at them. “Various angles”… which means you’d better make sure they all look great once you finish building your team. To make it easier for you – we provided the same view also within the “Draft tool” tab, available once you click the “details” link within “My standing” panel.

And while you do your best to make sure your team is strong enough to dominate the regular season, don’t forget to focus on players with the best fantasy playoff outlook, presented in the column with the “cup” icon.

Working on all of that at the same time, in the heat of the draft is not easy, huh? Well, the more challenging the game is, the more satisfaction it brings. And drafting is just a start of your analysis!

Because you know… Winning in fantasy basketball is not based purely on luck.