What is the ACL?

The anterior cruciate ligament, or ACL, is one of the two major intra-articular ligaments of the knee (think deep inside) and the primary ligament of the knee that helps to stabilize and prevent the leg from falling forward. Additionally the ACL protects the knee against varus and valgus stress when the knee is in full extension. The ACL is comprised of 2 different bundles, the anteromedial bundle that tightens in flexion, and the posterolateral bundle, which tightens in full extension. The greatest amount of tension on the ACL is when the knee is flexed 30 degrees. 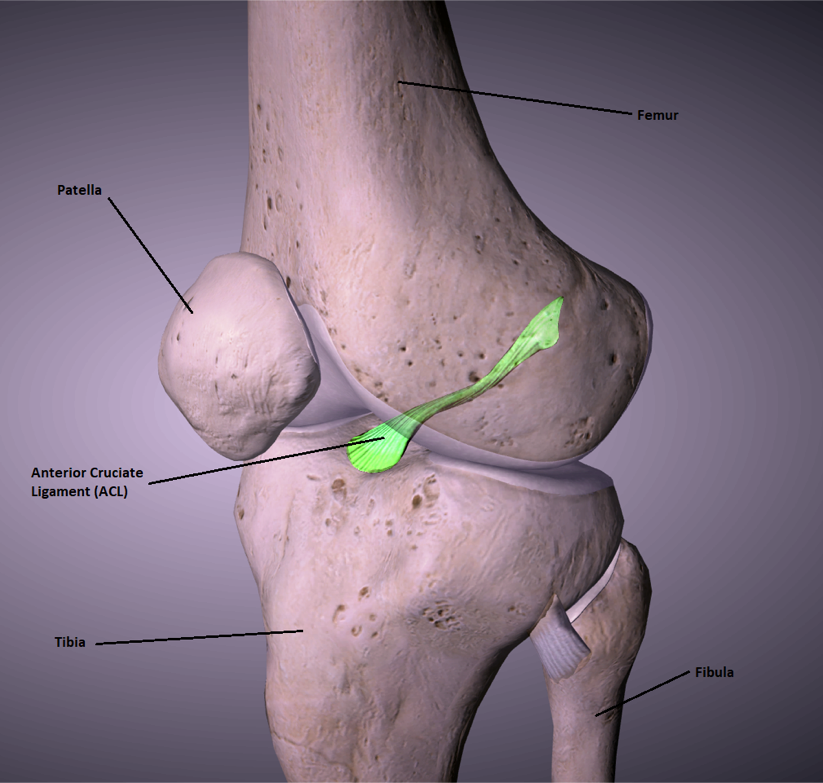 The PCL or posterior cruciate ligament is the ACL’s counterpart, and the two ligaments are essentially crisscrossed deep in the middle of the knee. The PCL also helps to stabilize the leg, but does the opposite of the ACL, basically preventing the leg from abnormally collapsing backward. Unlike the ACL, which tear more commonly, especially in certain patient populations and activities, the PCL is very difficult to tear. The PCL is most commonly torn during significant trauma, including falls from large heights or ‘dashboard injuries,’ when the knee smashes into the dashboard during a high-speed motor vehicle collision. 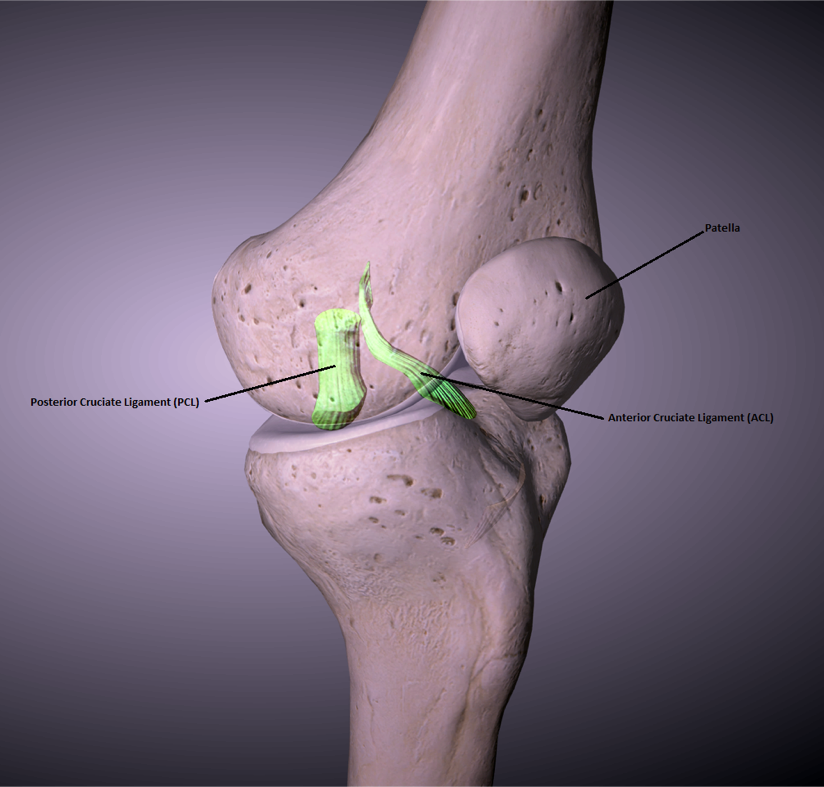 The incidence of ACL injury is higher in people who participate in high-risk sports, such as basketball, football, skiing and soccer, basically activity that requires quick cutting of the legs. It is estimated that more than 200,000 ACL injuries occur in the U.S. each year, many of them during athletic activities. 70% of injuries to the ACL occur by noncontact mechanisms. Common mechanisms of injury include pivoting during acceleration or deceleration, and forcefully landing on the heel with a small knee flexion angle. If the ACL is torn during a contact-induced injury, it is usually due to severe valgus stress on the straightened knee.

Although males and females sustain approximately equal number of total ACL injuries, women who participate in sports actually are 3-8 times more likely than males to sustain injury to the ACL. The primary reasons for this include smaller ligaments relative to body size, increased joint laxity, higher levels of estrogen, and smaller intercondylar notch dimensions. Additionally, studies have shown that women have different neuromuscular mechanics that unfortunately expose them to ACL injury, including a greater activation of their quadriceps muscle relative to their hamstrings, and women tend to land from jumps with a less flexed knee.

How do you evaluate for an ACL tear?

A very thorough history and physical exam is the most important aspect in evaluation of a possible ACL injury. Patients will often report pain and instability, especially after landing or ‘cutting’ in a noncontact situation. Many patients who sustain the injury describe hearing a ‘pop’ in the knee followed by immediate swelling, making return to play very challenging. Although the ACL can be torn by itself, approximately 50% of ACL injuries occur in combination with damage to the MCL, lateral meniscus, articular cartilage and bone bruises.

The Lachman test is the most important physical exam for ACL injuries, as it has 85% sensitivity and 94% specificity in detecting the injury. A positive test will consist of the lower leg moving greater than 3 mm anteriorly compared to the contralateral knee, and has a ‘soft’ endpoint. Although not as sensitive and specific as the Lachman test, the anterior draw test can be useful for evaluation of chronic ACL injuries.

In addition to history and physical exam, it is important to get both an X-ray as well as an MRI of the knee. The X-ray will not help with diagnosing the actual ligament injury, that is what the MRI is for, but it is important in evaluating for other injuries, like associated bone fractures. An MRI is not necessary to make the diagnosis of ACL rupture, but it is very helpful in visualizing the extent of the injury as well as evaluating for other injuries within the knee. MRI, especially high-resolution, is the most accurate diagnostic test for knee injuries, as it has a high sensitivity and specificity. The imaging will show focal discontinuity of ligament fibers, an abnormal slope of the ACL, and a small piece of the anterior tibial spine bone that has broken off (avulsion fracture). The ligament can be torn either partially or completely. Partial-thickness ACL tears can be difficult to diagnose because there is only partial ligament fiber discontinuity, as opposed to full ligament fiber discontinuity in the full-thickness tears.

How are ACL tears fixed?

Most people can have a completely normally functioning life without repairing an ACL tear, but there will be limitations. There have been several famous athletes that were very successful without a healthy ACL. Whether it was torn and never repaired, or simply they were just never born with one, including John Elway, Hines Ward, Philip Rivers, Joe Namath, Mickey Mantle, Logan Mankins, and DeJuan Blair just to name a few. ACL-deficient knees demonstrate increased instability in terms of the knee giving out anteriorly when force is applied. This increases significantly when there is a combined meniscal injury as well.

Conservative, non-surgical treatment includes focusing on regaining normal range of motion (ROM) in the knee, and strengthening the secondary stabilizer muscles of knee, particularly the hamstrings. Rotational and lateral movement should be avoided in the first 6-12 weeks, and returning to competitive sports should be avoided for at least 3 months. Most patients who go this route will report suffering from instability, and thereby decrease their level of activity as a result. In the athletic population, ACL tears are typically repaired because if not this can lead to chronic ACL deficiency, which is associated with a higher risk of tearing the medial meniscus.

The indications for surgical reconstruction include athletes, combined meniscal injuries, complete tears to any of the other 3 major knee ligaments, and patients experiencing instability that interferes with activities of daily living. This is a very common surgery, as more than 100,000 ACL reconstructions are performed each year. If the surgery route is chosen, it is often wise to wait 3-4 weeks after the injury to allow the swelling to resolve, and the ROM to return to normal. Going to surgery too quickly after the injury can result in arthrofibrosis, which is when excessive scar tissues develops leading to restricted ROM, pain and can be associated with degenerative arthritis.

The actual surgery involves drilling tunnels through the tibia (lower leg bone) and femur (thigh bone), and placing a graft through the tunnels to serve as scaffolding for new ligament growth. The most common grafts used are often the patient’s own patellar tendon, or the semitendinosus and gracilis tendons (hamstring); sometimes grafts from a cadaver can be used as well.

Does it matter which type of graft is used?

The grafts created from the patient’s patellar tendon, which also include bone plugs from the patella and tibial tubercle, are called bone-tendon-bone (BTB) autografts. Studies have shown that use of BTB have lower failure rates than hamstring grafts, making them ideal for younger, more active patients. Hamstring tendon grafts cause fewer complications with the patient, have greater tensile strength, but take longer to fully heal. Allografts have low incidence in disease transmission, decreased operating time, increased cost, but younger and more active patients have been shown to have very high rates of failure. There have been some new techniques gaining popularity over recent years, including a double-bundle repair that uses two separate grafts to mimic the natural ACL’s distinct bundles. These have shown superior rotational ability postoperatively, but clinically they have not shown to make a difference.

Unfortunately tearing of the ACL is not an isolated incident, as 50% of patients will suffer from osteoarthritis in their ACL-torn knee between 10 and 20 years after the injury, regardless of their treatment. This incidence increases if the patient also sustains an injury to the meniscus at the same time as the ACL tear.

This was written by Dr. Jesse Morse, I am a Board-Certified Family Medicine physician, and I am currently completing a Sports Medicine Fellowship at the University of South Florida in Tampa. This information should be used for entertainment only, and not for medical advice. If you have any questions or comments, you can contact me directly at @DrJesseMorse or visit my website at: www.DrJesseMorse.com. Keep an eye out for my next article!